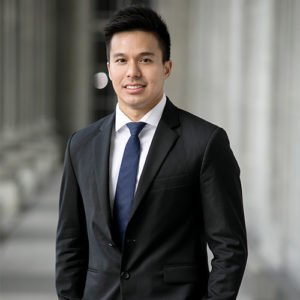 Andrew graduated from the National University of Singapore with an LLB (Hons) degree in 2008 and was admitted to the Singapore Bar in 2009. In October 2017, Andrew was featured as one of "Asia's brightest young legal minds under 40 years of age making waves" by the Asian Legal Business Publication. Andrew has over a decade of experience in practice and has acted in complex commercial and civil disputes as well as advised on corporate and regulatory compliance matters. Andrew's experince also extends to the areas of maritime, offshore oil and gas, energy and international trade. Andrew has advised and acted in disputes involving charterparties, marine insurance, shipbuilding and repair, bills of lading and documentary letters of credit, ship collisions and ship arrests. Andrew also engages in advisory work on all aspects of shipping regulatory and compliance matters. Andrew has acted in SIAC, UNCITRAL, LMAA and SCMA arbitration proceedings, and was involved in one of the first offshore cases to be heard in the Singapore International Commercial Court. Andrew currently heads his firm's Private Client Practice Group and has acted in estate disputes involving significant assets in multiple cross-border jurisdictions. Andrew also deals with contentious matrimonial proceedings and disputes in custody matters. Andrew regularly advises high net-worth individuals on complex estate, trust and succession planning matters involving cross-border assets. Andrew was also named by the Singapore Business Review as one of Singapore’s most influential minds aged 40 and under for 2018.

Reading Time: 6 minutesTo what extent can civilians be involved in prosecuting a perpetrator? In what ways can civilians as individuals bring justice and be involved within the criminal process? Such questions are posed by ordinary people like us, who doubt whether we have a moral responsibility to bring criminals in light of the law. We as civilians […]

Reading Time: 9 minutesMoney makes the world go around. This phrase very aptly describes the reason behind the innumerable safeguards against money laundering. Money laundering can be defined as the process of converting money obtained from criminal activities into money that appears to have been obtained from legitimate means. The issue of money laundering has been in the […]