A checklist for victims of Cyberbullying or Online Defamation
0Shares
0 0 0
ASIALAWNETWORK.COM

Information technology and us

The internet arguably has the widest reach of any form of communication. We have moved away from the traditional “one-to-many” models such as print media, radio, and television broadcasts to an interactive, “many-to-many” model where social media and online platforms such as Instagram, Twitter, Facebook, Linkedin, Youtube have taken a lead role. This trend coupled with the increase in the use of email communication has fueled a rapid growth in information technology.

A new face for an old friend

Defamation and harassment per se are not new phenomena and existed long before the internet. However, information technology has changed the way we perceive and react to such wrongful conduct. Further, the manner in which the internet is designed and operates impacts how we handle and address bullying/harassment and defamation online. Key challenges are:

a) The internet is vast

It is impossible for any individual or business to have access to all the information or content generated and shared by users on the internet. This creates difficulty in the ability to identify defamatory statements made on the internet and take appropriate steps in a timely manner.

The longer the defamatory statements remain online, the greater the risk and damage that the victim would suffer given the ease with which information may be shared, reposted and commented on.

c) The internet provides users the advantage of anonymity

The use of the colloquial expression “internet troll” is common these days. These are individuals who remain anonymous or use a fictitious identity to maliciously publish statements online or engage in cyberbullying/harassment. Consumer reviews which are maliciously published on websites such as Yelp, TripAdvisor, HungryGoWhere, Booking.com are a good example. The challenge for businesses is that these reviews may negatively impact how consumers view a particular business or a service provided.

A checklist for victims of online defamation or cyberbullying/harassment

#1. Ascertain the identity of the perpetrator

Most perpetrators do not reveal their true identity when engaging in wrongful conduct, via the internet. It is necessary therefore to identify the identity of the perpetrators before deciding the necessary steps to be taken.

Step 01: Engaging the person to gather more information about him/her. This information may allow for an educated guess as to the identity of the person. For example: whether this individual is an ex-employee/colleague, a competitor or party with a vested interest in damaging one’s reputation.

There is always the risk that the information provided to the service provider when opening the email account or social media account was fictitious. In most cases, however, the victim is able to obtain at least one or two pieces of useful information, such as an active mobile number or the date of birth, which assists in the ability to identify the perpetrator or at the very least narrow down the possible identity of the perpetrator.

#2. File a report with the police

This should be done even if there is no expectation that criminal proceedings will actually follow. The police have much wider powers and under certain mutual legal assistance treaties between Singapore and other countries, they may be able to identify perpetrators and act more quickly.

The existing legislation, in particular, the Prevention from Harassment Act safeguards individuals and businesses from online defamation, harassing conduct on the Internet and related antisocial behaviour. Any perpetrator who is found to have breached this Act may face both criminal and civil penalties.

Online reputation firms have at their disposal search engine optimization software that can help to identify and remove defamatory statements and negative content from the pages generated by search engines. They are able to assist where there is a real likelihood that the online statements have been shared on various social media platforms.

As far as possible, all instances of contact (by whatever means) or online postings when noticed should be recorded or logged. The easiest method is to take screenshots. It may be a cumulative course of conduct on the part of the perpetrator which ultimately justifies the imposition of criminal or civil penalties.

Furthermore, it is difficult (and sometimes impossible) to access historical material from social media platforms. For example: Instagram stories disappear after 24 hours and posts on Twitter and Facebook could be edited at any point in time.

There may be a need to avoid closing social media accounts or deleting online posts before consulting the police or a lawyer to prevent the loss of vital evidence. This can be difficult decision to make in certain circumstances as the harassment or publication of defamatory statements may only continue if the victim’s social media account remains active or posts are available on the internet.

It is important to carefully consider the potential risks of proceeding to court in relation to claims regarding defamatory statements or cyberbullying/harassment. These include:

There is no doubt that the internet and social media have revolutionised the way we communicate with one another. It is however important that individuals and businesses recognise the myriad ever-lurking challenges that accompany the use of social media and bear in mind the need to carefully navigate these challenges to prevent, avoid and stop persons from using online platforms to engage in online defamation or cyberbullying/harassment. 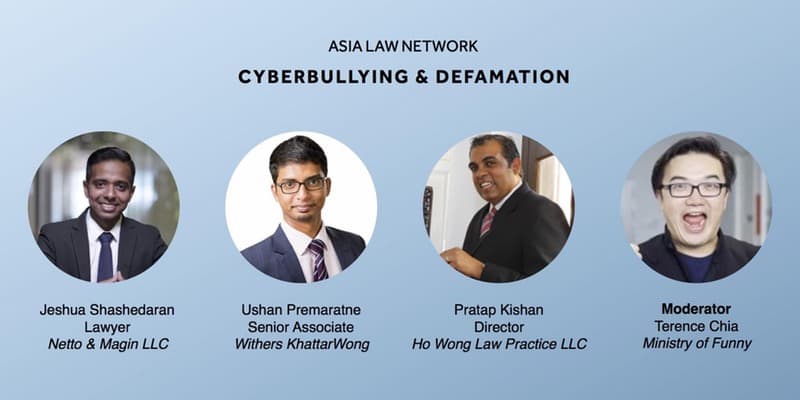 If you are a victim of cyberbullying or online defamation, you can get legal help and understand your rights by booking a Quick Consult. When you get an AsiaLawNetwork Quick Consult, a lawyer will call back within 1-2 days for a transparent, flat fee starting at S$49 to answer your questions and give you legal guidance on your potential next steps.

Ushan enjoys a broad-based international arbitration and litigation practice. Ushan regularly appears in commercial arbitrations, before the ICC and the SIAC, in cases concerning subjects such as private equity investments, software contracts and commodities. He also has experience in both trial and appellate litigation in Singapore. He is frequently instructed as counsel in relation to corporate and commercial disputes especially in the areas of banking, property, financial and investment-related claims and defamation and reputation protection. Ushan graduated from the National University of Singapore with a Double Degree with Honours in Law and Business Administration (Finance) in 2010. He was called to the Singapore Bar in 2011. 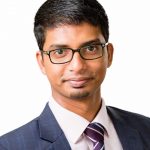 Ushan enjoys a broad-based international arbitration and litigation practice. Ushan regularly appears in commercial arbitrations, before the ICC and the SIAC, in cases concerning subjects such as private equity investments, software contracts and commodities. He also has experience in both trial and appellate litigation in Singapore. He is frequently instructed as counsel in relation to corporate and commercial disputes especially in the areas of banking, property, financial and investment-related claims and defamation and reputation protection. Ushan graduated from the National University of Singapore with a Double Degree with Honours in Law and Business Administration (Finance) in 2010. He was called to the Singapore Bar in 2011.