Workplace bullying is more common than you think

It is often said that the office is a second home. This is especially so in Singapore, where long hours of work is a norm. A 2016 survey conducted by Roffey Park (a leadership institute based in Singapore and the UK) revealed that Singaporean employees spend even more time at work than their Hong Kong and China counterparts.

Apart from that, the survey found that more than half of Singapore workers felt increasingly stressed over the last six months.

These two factors – long work hours and high stress levels at the workplace – lead to an increased possibility of conflict at the workplace. This may explain why a 2012 online survey (conducted by JobsCentral) revealed that 24 per cent of Singaporean employees felt that they were victims of office bullying.

What is workplace bullying?

It can be blatant or subtle. Blatant forms may involve hurling vulgarities at an employee, or even physical abuse in the form of shoving or pushing. For example, a local case of workplace bullying hit the news in 2015, where the victim described how his supervisor had thrown a plastic folder at his face

It can also be sexual or non-sexual in nature. Sexual harassment may involve unwelcome physical contact or requests for such contact, sexually coloured remarks and showing obscene images to a colleague. In 2017, The New Paper reported on how a Mediacorp employee had made “inappropriate remarks” to a Channel NewsAsia producer, Ms Park Juwon. Specifically, he claimed that she could not be a presenter due to her lack of bodily assets. In addition, The Sunday Times interviewed women in the Singapore entertainment industry in 2017, and obtained many anecdotal accounts of sexual harassment by superiors.

In this digital age, workplace bullying can even occur on digital platforms, in the form of cyber-bullying. For example, cyber-bullying can occur when a co-worker uploads compromising photos of a fellow worker onto Facebook, where everyone can see it. It can also involve spreading malicious falsehoods about a colleague via a blog post. This may be more serious than conventional forms of bullying, because information published online can reach a wide audience, and can go viral easily. Such information can also be difficult to remove completely from the Internet.

As a victim of workplace bullying, what legal remedies can you seek?

Your options in a nutshell

The remedies that you have would depend on the severity of the workplace bullying. Here is a quick guide to what options you have. 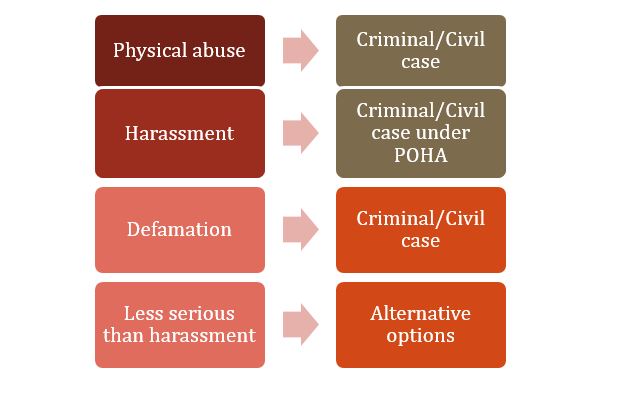 If the workplace bullying involves physical abuse, the perpetrator may face civil or criminal action, or both.

If the workplace bullying is serious enough to constitute harassment under the Protection from Harassment Act, Cap 256A (“POHA”), the perpetrator may similarly be faced with a criminal or civil case, or both.

If workplace bullying results in defamation, a criminal or civil case, or both can be sought as a remedy.

If the workplace bullying is less serious than harassment as defined under POHA, the victim may not have a direct legal recourse against the bully, and may have to explore alternative options.

We will now explore the range of remedies that are available to victims in these three situations. 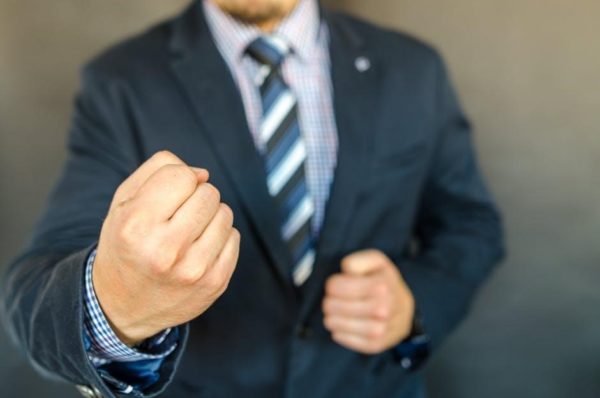 In extreme cases, workplace bullying may adopt the form of physical abuse. This can involve unwarranted physical contact such as slaps, punches or pushes. In such cases, the victim may

Option (a): Physical abuse as a criminal offence

A successful criminal prosecution may result in monetary compensation to the victim (in accordance with Section 359 of the Criminal Procedure Code) and ensures that the offender is duly punished for his extreme form of bullying.

Should the victim report the case to the police, the Prosecution may decide to charge the offender under the Penal Code (Cap 224) (“PC”). Potentially relevant sections include: Voluntarily causing hurt (section 321), wrongful confinement (section 340), criminal force (section 350), assault (section 351), and criminal intimidation (section 503).

The general exception in s 95 PC should be noted – if the harm is so slight that a person of ordinary sense and temper would not complain of it, the bully would not have committed a criminal offence.

Option (b): Physical abuse as a civil wrong

The victim may also commence a civil suit against the bully for battery. The two main relevant causes of action would be the tort of battery and the tort of assault.

The tort of battery occurs when there is direct physical contact between the bully and the victim, which is intended by the bully. Furthermore, such physical contact must be unjustified – meaning that such contact must not be generally acceptable in the ordinary conduct of daily life (Wainwright v Home Office [2004] 2 AC 406, at [9]). Notably, if the bully throws an object at the victim, this still counts as direct contact.

Even if the victim does not suffer any physical harm from the contact, he or she can still sue for the tort of battery (Cole v Turner [1704] 6 Mod Rep 149). However, practically speaking, the victim would only be able to recover nominal damages in such situations, which may not be worthwhile. Conversely, if the victim did suffer substantial injuries from the battery, he or she would be able to claim for a greater quantum of damages from the bully.

The tort of assault occurs when the bully commits an act which causes the victim to reasonably apprehend the affliction of immediate, unlawful force on him. The bully must have intended to cause such apprehension on the victim’s part.

Unlike the tort of battery, no direct physical contact is required to establish the tort of assault. If no physical harm is suffered, the victim may attempt to seek compensation for emotional and psychological harm that is suffered. However, such damages are generally hard to prove and quantify, and may result in only nominal damages being awarded. The victim is likely to obtain a higher chance of recompense if he has indeed suffered some form of physical harm as well.

According to case law, harassment essentially occurs when a person exhibits verbal or non-verbal conduct that is determined and calculated to be threatening, abusive or insulting towards another person, such that it is likely to cause the latter distress and alarm when he or she perceives it.

POHA is intended to strengthen harassment laws in Singapore, and captures a variety of harassment behaviours – be it blatant or subtle, sexual or non-sexual, and even online behaviour.

As a victim of bullying, you will likely have a remedy based on s. 3, 4, 5 or 7 of POHA. The table below breaks down each section.

If the victim suspects that the bully has committed offences under s 3, 4, 5 or 7 POHA, the victim may choose to

This section will explore these available remedies for the victim.

Should the Public Prosecutor decide to charge the bully under the relevant section(s) and if the bully is convicted, the punishment for a first time offender is as follows:

If the police chooses not to investigate the matter after the victim has made a police report, the victim has the option to file a Magistrate’s Complaint.

#2. Civil case against the bully

The victim may seek to commence a civil case against the bully (s 11 POHA). The victim would have to adduce sufficient evidence to establish that it is on a balance of probabilities that the bully had breached the POHA. Such evidence may include photos or videos of the offending conduct. This is also subject to any defences which the bully may raise.

If the victim succeeds, there are several options including (a) Monetary Compensation, (b) Protection order, (c) Expedited Protection Order and (d) Non-Publication Order.

If the victim succeeds in establishing the case, he or she may claim monetary compensation for his or her alarm or distress as a result of the bully’s harassment. If the victim has sought medical treatment due to the harassment, he or she should retain the relevant medical records and invoices as proof for the claim.

The victim may also seek a Protection Order against the bully (s 12 POHA).

For urgent cases, the victim may seek an Expedited Protection Order against the bully (s 13 POHA).

An Expedited Protection Order is only for a limited time.

For cases involving false statements of fact, the victim may also seek a Non-Publication Order against the bully under s 15 POHA.

A breach of Non-Publication Order is contempt of court.

The strength of your case may be affected if the bully can avail himself of a defence. This section briefly covers the possible defences which the bully may raise for each section.

The bully may have a defence if his conduct was reasonable (s 3(3) POHA). To determine whether the bully’s conduct is reasonable, the court will consider (Benber Dayo Yu v Jacter Singh [2017] 5 SLR 316 at [43]):

The bully has a defence if his conduct was reasonable (s 4(3)(b) POHA). In addition to that, he has another possible defence (s 4(3)(a) POHA) – that he had no reason to believe that his verbal or non-verbal conduct would be heard, seen or otherwise perceived by the victim.

Defences for section 5  (Fear or provocation of violence)

The bully’s defences here are similar to those under section 4 POHA, as discussed above.

For a case under section 7 POHA, the bully generally has 2 main defences. He may argue that

The second defence would be rarely invoked, at least for the usual cases involving workplace bullying. Thus, the bully’s main recourse would be to the first defence of reasonable course of conduct.

Even if  workplace bullying is not serious enough to constitute harassment, you still have some options

In some cases, uncomfortable behaviour perpetuated by your colleagues may not be enough to amount to harassment. Nonetheless, you still have several options. These include:

Workplace bullying is a serious phenomenon, with negative effects on both the employee and the organisation generally. No one should have to suffer in silence. Should you be facing such a predicament, you should know your rights and remedies, and explore the available options to prevent such incidents from continuing.

Have a question about workplace bullying?

If you have any questions, you can get a Quick Consult with Lau Kah Mei or other lawyers from a transparent, flat fee of S$49. You can expect a call back within 1-2 days on the phone to get legal advice and have your questions answered.

This article is written by Lau Kah Mei from LKM Law Corporation and Chang Chee Jun  from the  Asian Law Students’ Association.

Singapore Patents – High Court Upholds Valid...
When is a civilian allowed to arrest a criminal in...
To mediate or not to mediate? View point from an i...
Shareholder Activism and How It May Affect Your Lo...
Know Your Lawyer: Clarence Lun, Managing Director ...
Share This
0Shares
0 0 0
Previous Article

Governing Law & Contracts: Why You Should Never Forget It! 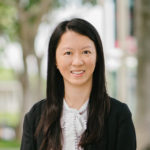