Deciding how to end your marriage in Singapore – divorce, separation or annulment?
0Shares
0 0 0
ASIALAWNETWORK.COM

Sometimes ending your marriage is the answer

If you are planning to end your marriage, you can take comfort in the fact that you’re not alone. Ending a marriage may be the right decision for some married couples to resolve differences and get a new start to their lives.

According to data released by the Department of Statistics (Singapore) on 13 July 2016, the median marriage duration for divorces in 2015 was at 10 years. This shows that both young and old couples are choosing to end their marriage. Here’s an infographic from Singstat that breaks down some of the key figures you should know. 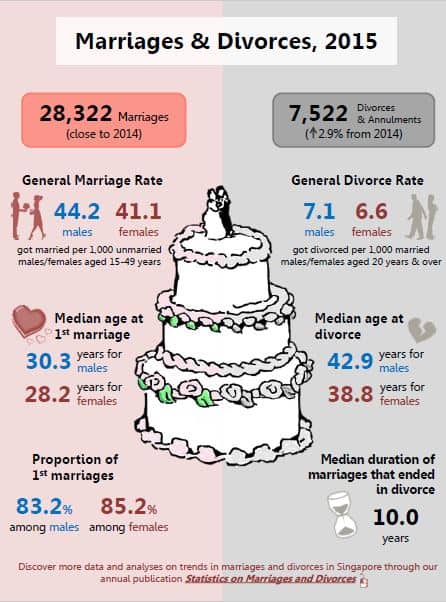 While the choice to end a troubled marriage might be clear to couples, choosing a type of marriage dissolution is something very important to consider. Most couples assume that the most appropriate mechanism to end their marriage is divorce, but the truth is that there are other options such as annulment or separation which may actually be better mechanisms to end a marriage.

So, which is the one that is suitable to end your marriage?

Option 1 – Divorce, the option with the strictest requirements

A divorce is the legal process of terminating a marriage. Compared to the other options for marriage dissolution, a divorce has the strictest requirements for eligibility as it considers the length of marriage, the habitual residence of the applicant and the reasons for divorce.

To file for divorce, both parties have to be married for at least 3 years or demonstrate exceptional depravity or hardship. Such hardship may include extreme mental distress, physical or mental abuse or unusually cruel adultery. If the party filing for divorce is a foreigner, he/she must demonstrate that he/she has lived in Singapore for at least 3 years or has an intention to be domiciled in Singapore indefinitely.

The applicant also has to provide reasons for a divorce. The reasons for divorce recognized in Singapore include:

The top reason for divorce in 2015 was “unreasonable behaviour”, with 53.9% of applicants listing behaviours such as violence, alcoholism, drug addiction and verbal abuse.

For example, a few examples of successful divorce cases that demonstrated exceptional depravity or hardship

Reasons why divorce might not be the best option for you

Although divorce is becoming an increasingly popular option amongst Singaporeans, couples who get a divorce might potentially face stigma from family and friends who are more conservative and religious.

A divorce could be expensive or not, depending if it’s contested

The cost for a divorce depends on whether it is a contested or uncontested divorce. A contested divorce is usually pursued when the relationship between parties is acrimonious and hostile. Parties who are unable to agree on the termination of marriage and ancillary matters (e.g. division of matrimonial assets, custody of children and maintenance of children) often choose this option. The Family Court will preside over the proceedings of a contested divorce. Such proceedings can be costly and prolonged if matters are complex and cannot be resolved quickly.

On the other hand, an uncontested divorce is usually pursued when parties in a marriage can establish agreement on the terms of the divorce. Parties will determine the division of assets and liabilities as well as provide supporting documentation on the terms of the agreement. While parties must file their divorce papers in the Family Court, they are not required to attend court and are able to end their marriage amicably.

“The uncontested divorce is the quickest way to terminate your marriage in Singapore. It takes anywhere from 4-5 months (with ownership of private property) to 6 months (if there is ownership of HDB property) to get to the final certificate stage”– Gloria James-Civetta & Co, Advocates and Solicitors

Option 2 – In a Separation, a couple remain legally married to one another but can determine terms of separation in a flexible way

Compared to a divorce, it is relatively easier for parties to commence on separation proceedings. There are no pre-requisites for the length of marriage or the habitual residence of the applicant. In the case of separation, parties are still legally married to each other and cannot remarry. Such an arrangement might allow parties to fulfil their religious commitments towards marriage as a unbreakable union while also avoiding the social stigma associated with divorce.

Parties can also choose to separate without referring to a particular action undertaken by their spouse. In practice, many couples choose to apply for separation as a precursor to a divorce agreement. In 2015, 42.6% of divorces were justified on the basis that the couple had “lived apart or separated for three years of more”- the second highest reason for divorce.

Starting with an informal separations is simple and affordable, and escalate from there

In an informal separation, parties live apart based on agreed terms. This provides flexibility as parties can decide on the terms of separation by themselves. To ensure that this arrangement is valid and recognized by the courts, parties should ensure physical separation and the discontinuation of spousal duties (e.g. cooking, cleaning for each other). An informal separation agreement can be achieved by mutual consent between parties and requires little administrative costs.

On the other hand, a formal separation is where Parties agree upon a Deed of Separation, a document that defines the terms and conditions of the relationship during separation.The Deed of Separation may contain information on the following: Child custody, division of wealth, spousal support, and maintenance etc.

This document is usually drafted by a lawyer and its effect is similar to the ancillary matters in a divorce agreement. This Deed of Separation can be registered with a court and is a useful precursor to divorce as it prepares parties for the practical arrangements for an eventual termination of the marriage. Costs involved in such a separation include the lawyers’ fees and other administrative costs.

Judicial separation can be costly and complex

Annulment is a means of dissolving a marriage for a specific set of circumstances.An annulment can be for either a void or voidable marriage that is less than 3 years. While the effect of a divorce is that a marriage becomes terminated, the effect of an annulment is that the marriage never existed at all. This usually means that the Courts will assign all property and debt back to the original owner as it was before the marriage. This provides an advantage to parties who want ownership of their original assets.

In general, it is usually harder to seek an annulment of a void marriage than a voidable marriage as a marriage license would not be issued to parties who belong to the above-mentioned categories. Recently, annulment has become a popular option between Singapore men and their foreign brides, with the number of annulment between inter-ethnic couples increasing by 29% from 2013 to 2014. However, the total number of successful annulments in 2015 was 405, a small number compared to the 7117 successful divorces in the same year.

Cost: The cost for annulment depends on whether it is uncontested or contested. For uncontested annulment, the case must be heard by the Court and will involve both lawyer fees and other administrative costs.

However, for contested annulments, the cost will depend on the complexity and length of proceedings. In cases where the other party opposes the annulment and the Court requires additional evidence, an annulment can be very costly.

So, what’s the bottom line?

Divorce is likely your best option if you have been married for more than 3 years, see no chance of reconciliation and can produce grounds for a divorce.

Separation exists as an option to stay legally married to your spouse but live separate lives in cases where the couple wants a chance for reconciliation or maintaining their religious commitment to stay married.

Annulment exists for specific circumstances of void or voidable marriages which will render it as if the marriage never took place, and assets are divided by reverting it to the original state before the marriage.

The cost of each option depends on whether or not it is contested or formalized. The most expensive options are those that are contentious and are prolonged in court. Couples who are cost-conscious should try to come to a peaceful agreement on how the marriage should end.

Keep reading on this topic

Get in touch with an experienced divorce lawyer

If you would like to seek legal advice on how to end your marriage, you can talk to an experienced divorce lawyer by booking a Quick Consult. When you get a Quick Consult, an experienced practicing lawyer (who is certified to practice with the Law Society of Singapore) will call back within 48 hours to give you legal advice for a transparent, flat fee starting at S$49. Your lawyer will also answer your questions and give you legal guidance on your potential next steps.

This article is written by Seah Ern Xu from Asia Law Network.

Getting Legal Advice is No Longer Difficult or Exp...
Proving Adultery in Divorce Under Singapore Law
Checklist for selecting a lawyer online
How to find the best Singapore lawyer for your cas...
Women’s Charter: A Practical Guide Part 1
Share This
0Shares
0 0 0
Previous Article

Pokemon No Go: 4 ways you could be unknowingly breaking the law

What is Corporate Insolvency and how does it affect you?